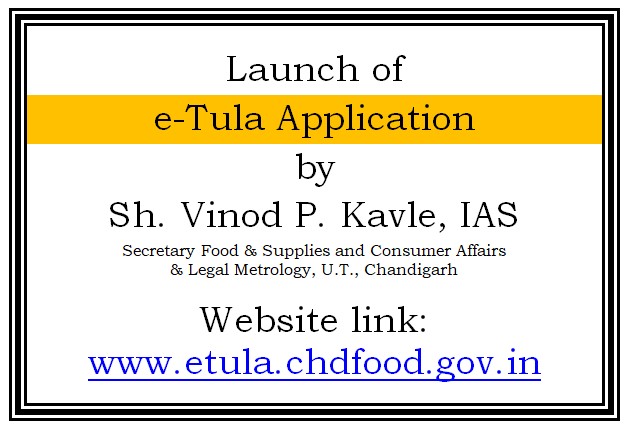 Under the Pradhan Mantri Garib Kalyan Anna Yojna, the Government of India is providing 5kg. wheat per member per month and 1kg. pulses per family per month for 3 months (April, May & June, 2020) to the registered beneficiaries under NFSA free of cost.

The Chandigarh Administration has decided to distribute 3 months food grains in one go i.e. 15kg Wheat per person and 03kg Pulses per family to all registered beneficiaries as Priority Households and AAY households under DBT Scheme for food grains as per provisions of NFSA free of cost at their door step.

This is in addition to the food subsidy already made available in the bank accounts of registered beneficiaries.

Vacancy for President in District Commission

Vacancy for Members in State Commission

One Nation One Ration Card Scheme launched by the Department

LAUNCH OF ONE NATION, ONE RATIONCARD IN UNION TERRITORY, CHANDIGARH

The U.T. Chandigarh is the first UT to introduce the ONORC Scheme with integration of DBT. It may also be noted that, Chandigarh has recently been rankedasthe Best administered UT in the country.

This ONORC enables the migrant beneficiaries to get ration, even when he moves out to other states or UTs. This is particularly helpful for the migrant labor who stays a few months at one place and there after goes to other State for work. Without portability of the ration card, these migrant people were deprived of their entitlement of ration under the National Food Security Act, 2013.

For this purpose, the department has setup helpline no. “14445” and a dedicated service window in the office.  The migrant person has to either call on “14445” or visit the service window in the departmentto register under the ONORC Scheme. The migrant persons have to bring their Aadhar Card, Ration Card, Provide Bank Details and Address in Chandigarh. They have to visit the office for biometric authentication. After successful registration, the food subsidy amount in lieu of food grains will be transferred intothe the Migrant's bank account as per the entitlement under NFSA.